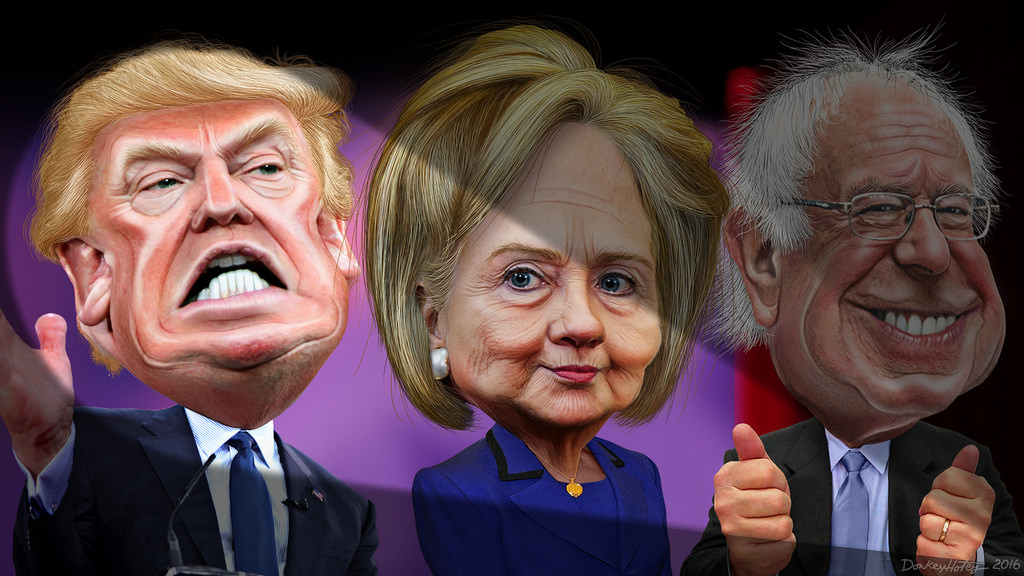 Confessions of a middle-aged “Bernista”

Read more
Yes, I confess… I am a middle-aged, white, male Bernista.
Alas, Bernie did not get the nomination, so I have to make a choice, and I’ve also chosen to declare it out loud and in public. I am, without reservation, endorsing Hillary Clinton for President of the United States. Why?
FIRST…
I want to make it clear that my endorsement is not merely due to Donald’s Trump wreck of a campaign. It does resemble a grisly accident, the kind desperate news directors salivate over; sensational, provocative, lurid, even bloody at times. The Donald has, so far, received far more free publicity than anyone should ever be allowed, but so much for that. The truth is, I’d support Clinton’s bid even if it were the lesser of two evils. For one, I believe The Donald is spectacularly unfit to serve as president of the United States, if for no other reason than his paper-thin ability to handle criticism.
Seriously… I want him nowhere near the red button.
LESSER OF TWO EVILS???
The Donald’s campaign may be a train wreck, and I may have preferred a Bernie Sanders ticket, but truth told, Ms. Clinton, is no slouch. In my opinion, she’s as or more qualified than any president serving in my lifetime (born in 1959).
YES… I WILL ELABORATE…..
But first I want to assure you, dear reader, I’m trying really hard to stay on the high road here. I could use some help, so please wish me luck. To start, I’d like to call everyone’s attention to the broken and bitter elephant in the room (pun intended). To wit, many Americans deeply distrust and vehemently dislike Ms. Clinton…. why? I suspect this animosity is a reflection of the ugly partisanship growing steadily since the “Fairness Doctrine’s” demise. The removal of the doctrine’s rules on public service broadcasting unloosed a tsunami of unfair, unbalanced right-wing bile, embraced fully by folks all ‘et up with fear and loathing for the declining supremacy of white middle-class males. The divide was further exacerbated by an unfair/unbalanced media fixation on a trumped-up “War Against Christian Culture.” This combined with relentless dishonest attacks against Ms. Clinton beginning in earnest with her first attempt to facilitate health care reform in 1993. Top all of that off with Ms. Clinton’s real flaws, missteps, and weaknesses, and you have an ideal witches brew fit for a perfect witch hunt.
BUT IS SHE A PERFECT PRESIDENTIAL CANDIDATE? NO FREAKIN’ WAY…
Clinton cannot blame a “Vast Right Wing Conspiracy” for all of her troubles. Ms. Clinton has earned a measure of suspicion and/or ambivalence. Cases in point, 1.) the closed meetings of first health care task force. 2.) The “Whitewater” debacle. 3.) The personal emails destroyed after leaving the State Department. 4.) Her reluctance to disclose a recent bout with pneumonia. 5.) The exorbitant cash earned on the speech circuit. And 6.) Her severe lack of personal charisma.
SO… WHAT DOES SHE HAVE?
TRUE GRIT… like Mattie Ross! I agree with the Washington Post’s assessment of Clinton’s career. I see it as a series of hard knock learning experiences preparing her for the environment. Example, when the walls came down on her health care reform task force, she did not give up. Instead, she reentered the fray helping to hammer together a more modest but essential reform expanding health-care access to economically disadvantaged children.
GRIT EXHIBIT B…
Ms. Clinton’s election to the Senate in 2000 also comes to mind. Those who remember the 1990s might think her justified in holding a grudge or two, especially toward Republicans who supported the relentless, lurid, and futile investigations against her husband in the impeachment and Senate trials. But it wasn’t to be. According to the Washington Post, colleagues in both parties found her to be, businesslike, knowledgeable, intent on results, working across the partisan divides, with little regard for personal credit.
WARTS AND ALL…
And though Ms. Clinton’s use of a private email server as secretary was misguided, in my opinion, it does not rise to the level of high crimes. Hell, who doesn’t want to simplify their email situation?? I have EVERYTHING forwarded to my private account, mainly because I don’t want two or more over-cluttered inboxes. I can barely manage one. But alas, I’m not dealing with highly sensitive classified information, and Ms. Clinton’s slow, grudging explanations worsened the damage. I also recognize Ms. Clinton should not have allowed an aide to go on the Clinton Foundation payroll while still at Department of State. This was a failure to maintain a clear separation between the foundation and the government; an integrity lapse she will not likely repeat.
STILL TRYING TO STAY ON THE HIGH ROAD HERE…
However, with all of her flaws and mistakes, The Donald makes Clinton look squeaky clean. She has released years of tax returns. The Donald will not. She has voluntarily identified her campaign bundlers. And The Donald? The Clinton Foundation actually is a charitable foundation … The Donald … well… he did get a lovely portrait of himself.

…TRUTH…
Ms. Clinton, as opaque as she sometimes appears, is Saran Wrap transparent compared to The Donald.

So … it is what it is: This white, male Bernista is committed to supporting Hillary Clinton for President of the United States … there … I said it out loud. Now, what do I expect from a Clinton presidency?

LOSING OUR MINDS AT THE END GAME…
Folks, this is a potentially historic moment, and I find it deeply troubling that any woman would support a move to repeal the 19th amendment in effect denying women the right to vote. WTF? There is no excuse for this straight-up crazy talk. Even IF highly motivated to head off the prospect of Clinton’s supreme court picks.

C’mon folks… we’re not turning clocks back…. hello!?!?
I see the recent #RepealThe19th as proof some of us have finally lost our minds. Please, close your eyes and try to imagine someone pushing a movement to repeal the 13th amendment… seriously… ?!?!?